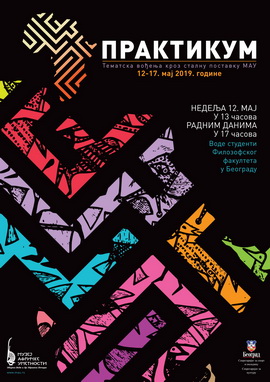 WHAT? “Practicum” is a special program of the Museum for final years students at the Faculty of Philosophy in Belgrade. Over the course of several months, mentored by curators, students diligently prepare new, original and extremely interesting guided tours through the permanent display.

HOW? By choosing topics which are linked to their studies – whether art history and ethnology, or philosophy, sociology, archaeology, history... but also, as the result of their wish to expand their knowledge of the material culture presented at the MAA.

WHY? “Practicum” is an opportunity for students to learn about the curatorial profession and at the same time, the program offers the wider public a new outlook and interpretation of the permanent display.

*Entrance to all tours is free!

The life of the people on the African continent is intertwined with the most diverse cultural practices. Ritual practices are very prominent and extremely important. In everyday life, but also in performing rituals, music plays an important role. First of all, the practice of collective music is developed on different musical instruments, whereby several members of the community perform music that is appropriate for a particular ceremony. When performing rituals, community members often use different masks. This guided tour through the permanent exhibition of the Museum of African Art aims to show the function of music in the life of the community: how music meets certain social norms and how it creates connectivity among community members.

The universal need for fertility, as a crowning motive in West African communities, is (mostly) symbolically represented through the fully developed female body. “Mother Earth” is the one who decides about the abundance of the crops and birth of healthy children. Many rituals are held in her honour – everything is done to appease her. Through the objects on the permanent display I will reconstruct the position of women in traditional West African societies.

AN INTRODUCTION TO AFRICAN PHILOSOPHY OF RELIGION: GOD AND THE CREATION OF THE WORLD

In contemporary African philosophy, religion and cultural tradition have an extraordinary place. Is there a god, and how did the world came into existence, are among the questions that have always intrigued the human mind. According to the studies of European travelers and missioners, the nations of West Africa were „pagans“, people without a religion; however, masks and sculptures on the permanent display of the Museum of African Art will convince you otherwise. Myths, rituals and religion are the basic elements of African philosophy and African philosophy is often named ethnophilosophy. While walking through the permanent exhibition you will learn somethin new and maybe discover the hidden philosopher within you.

MASKS OF LIFE'S IMPORTANCE – THE RITUALS OF WEST AFRICAN PEOPLES

The use of masks in rituals among the peoples of West Africa occupied researchers in their aims to understand the stories behind them, which are linked to protection from evil spirits, summoning the higher powers, fertility dances, etc. Opposite laymen conclusions that rituals are “theatre plays” whose only goal is to entertain, they were of extreme significance for the community. Actually, every important event in the life of the individual was marked with certain rituals. This guided tour through the permanent display will offer visitors an opportunity to enter the “spiritual” world and learn more about the traditions of West Africa, manifest in the objects of the permanent display.

ASHANTI, DAHOMEY, BENIN – THE ICONOGRAPHY OF THE RULER AND THE FUNCTION OF ROYAL OBJECTS

Representations, that is, the iconography of the ruler holds an important role in all civilizations, and the same goes for the societies of West Africa. This guided tour will follow the objects that best illustrate the status of the ruler, primarily in the states of the Ashanti Federation and the Dahomey Kingdom, but also the great cultural centre of West Africa – the city of Ife. Interpretations of the role of the ruler and the characteristics of royal objects will reveal the state and social order of these cultures and political centres. The guided tour will offer a glimpse into “royal” art which offers a solid starting point for a better understanding of the political and cultural circumstances in West Africa during the XVIII and XIX centuries.

THE ANCESTRAL CULTS OF WEST AFRICAN COMMUNITIES THROUGH MYTHS AND RITUALS

The Museum of African Art – the Veda and Dr. Zdravko Pečar Collection opened its doors to the public in 1977. It contains a number of authentic West African artifacts, which all have their own unique story. By referring to myths and rituals the public will learn about objects linked to the ancestral cult – whether figural sculpture or masks. Objects will be “experienced” not solely from their aesthetic aspects, but also in the context of their symbolism and overall function and importance within society. Most West African myths are focused on the creation of the world and the role of the first ancestors, as well as the rituals that connect individuals with the spirits of the past.