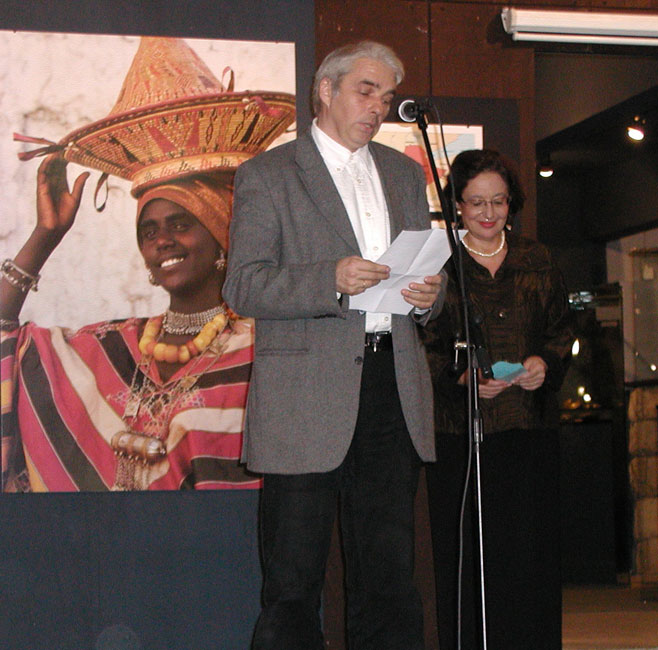 The exhibition was opened by Mileta Prodanovic (PhD), the Faculty of Fine Arts

Seven years ago in 2003, in this same place – The Museum of African Art, “The Splendour of Kings, Testimony of Faith” exhibition by Natasa Njegovanovic-Ristic was opened. The importance of this exhibition was that it gathered at one point the majority of artifacts of the ancient Ethiopian culture that were housed in different Belgrade collections; however, even more than that – the comprehensive text in the catalogue and documentation that presented existing immovable monuments opened a chapter into one of the oldest civilizations of the African continent.

What was stated at the time in the introduction to the catalogue – that the magnificent history of this country is generally unknown to our people – may be repeated. Even when it exists, our knowledge is fragmentary, unsystematic. My generation, for instance, will remember the nonaligned movement and the welcoming ceremonies held for the ruler of Ethiopia at the time. This will no doubt be the first association. As with every ruler so also Haile Selassie (a street in Belgrade carried his name at a certain point), may be interpreted in different ways; however, he remains a recognizable sign. Some will remember his resistance to fascism, or colonial attempts, some will remember the fact that he became the central point of a new religion that sprang in a completely different part of the world. For others, Ethiopia is a place where the Nile river starts, yet some also know Ethiopia as the birthplace of the Olympic marathon champions. Those more informed will know that from this land that elevates high above the Horn of Africa, comes coffee – without which life would be unimaginable, but also maybe even the life of Homo-sapiens.

On the other hand, of course, the number of people in Belgrade that know about Ethiopian heritage is not insignificant. If not through travel, then definitely with the help of books, catalogues, documentary films, or the internet – Axum, Lalibela and other sites have become a part of contemporary culture for a small caste of interested individuals. The exhibition before us, based on representative examples of applied arts, to a certain extent widens the framework of what was to be seen at the “The Splendour of Kings, Testimony of Faith” exhibition. It aims at enlarging the number of ardent followers of this culture. For this purpose, the introductory text competently written by Aleksandra Prodanovic Bojovic is very revealing.
The exhibition first and foremost underlines the ethnic and cultural diversity of this country which over the centuries was a place where the three largest monotheistic denominations merged – Judaism, Christianity and Islam. This is a point at which this exhibition differs from the previous one which focused on the dominant, Christian religion. Jewelry is from our perspective, solely a mode of adornment and prestige. In other cultures, it is besides this, also a part of a complex system of demarcation, of ethnic or class affiliation, or a part of the equally complex system of magical thought. All these aspects may be, if you dwell on them, discovered through this exhibition.
The examples of jewelry in front of you stand testimony to a civilization cut off by inaccessible geography that, somewhat paradoxically, absorbs and transforms the influences from distant lands; not only influences, but also materials. Just think of the long journey it took amber to travel from the Baltic to Lake Tana. Or silver that, before it is cast into jewelry, arrives in the form of a thaler with the image of Empress Maria Theresa.

These artifacts took equally complicated roads to arrive in our city. They were brought by people that, on different tasks, and through love, were connected with Ethiopia. It is important, I think to mention that, in the past period, through the purchase of some of these artifacts, certain pieces have found their place in the MAA collections and that they will no doubt find their place in some future permanent display, perhaps in the upper level that has been awaiting repair and completion for quite a few years now. A part of these pieces have been donated – as gift to the museum. This museum was created when a private collection became public. From time to time it acquires new objects through the generosity of different donors. Perhaps this is a good moment to announce that the socializing of the Belgrade audience and friends of this museum with the culture of Ethiopia will continue in the coming year when the public is presented yet another valuable legacy – the Nina Seferovic Collection. I believe that you will, by the time that we meet again at the opening of this exhibition, often mention the objects that are before us today and that the exhibition catalogue will find its permanent place on your bookshelves.