MAY AT THE MAA 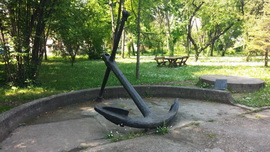 DAY OF BELGRADE MUSEUMS (Thursday, May 14)

EUROPEAN NIGHT OF MUSEUMS (Saturday, May 16)

INTERNATIONAL DAY OF MUSEUMS (Monday, May 18)

May is definitely the Month of Museums! Across the globe through a variety of programs audiences are invited to acknowledge the importance of museums as a bearers and protectors of cultural heritage. With 3 events during May, the Belgrade Museum of African Art will hold programs that focus not only on educating the public about different forms of material culture (painting murals among the Ndebele, South Africa), but also the various forms of intangible heritage through which cultural expressions are transmitted (Shira u'tfila concert). This year, particular importance is given to individuals to who have, due to different sometimes crucial historical circumstances, had the opportunity to play an important role of protector and holder of memories related to specific places and events (Platform on the Serbian cemetery in Algeria), as well as the younger generations ("Practicum") who through their commitment and participation in the creating museum programs, continue to act towards a task set before all of us – to consciously and proudly guard museum heritage.

Taking part in the DAY OF BELGRADE MUSEUMS the Museum of African Art will be open from 10h to 22h. Feel free to roam our exhibition spaces: the Permanent Display and current exhibition TRADITIONAL MURALS OF AFRICA.

THE MUSEUM AS EXHIBIT-PIECE: THE HISTORICAL CONTEXT OF THE MUSEUM OF AFRICAN ART'S FORMATION

Every museum tells a story through its exhibit pieces, sending a message to the observer that is for the most part a reflection of the ideals of a specific time. The Museum of African Art was created under the ideology of non-alignment and therefore held an important political role as well. What was this role exactly and the Museum’s function? Who were Zdravko and Veda Pеčаr the collectors to whom we are indebted for creating this museum’s collections? You will find out the answers to these and other questions by participating in the guided tour which focuses not particularly on the displayed objects themselves, but on the way they are presented, based on the approach of interpreting the Museum as an exhibited piece in itself.
(Part of the “Practicum” program.)

*Free entrance to all events.

from 17h to 20h
As part of the Night of Museums 2015 the Museum is organising a creative workshop: “Freedom and Equality: painted messages on Ndbele houses” for children aged 3 to 13 years old. Curators will explain the meanings behind different colours and images that appear on the walls of South African Ndbele houses and show how painting was used to express unity and defiance facing injustice. As part of the workshop, children will draw and paint symbols, patterns and use colours based on the technique that the Ndbele community used to “fight without weapons” for frееdоm аnd equality.

*Click here for more information about tickets for this event.

The Museum is proud to present the work of people who participated in saving and preserving the Serbian military Cemetery in the Deli Ibrahim quarter of the city of Algeria, which was the final resting place for 324 Serbian soldiers in World War I. Addressing the Platform are Mr Rаdоslаv Nеdić and others who participated in the efforts to preserve this monument as a direct testimony of First World War events and the untold suffering of those who lost their lives. Through such efforts these heroes have made sure that the memory of this important event in our history is not erased and that it is preserved for generations to come. There will also be a presentation of photographs of the Serbian cemeteries in Algeria taken by Stevan Labudović – participant in the Algerian war of liberation who, based on his merits, was awarded the highest medal of the Algerian government.