AFRIKA: STUDIES IN ART AND CULTURE 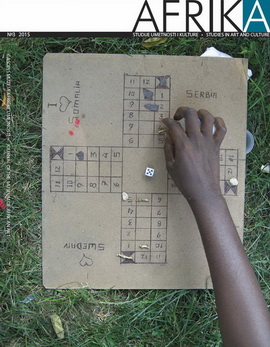 Third issue of the journal AFRIKA – Studies in Art and Culture has been published. This is a peer-reviewed academic journal, published biannually by the Museum of African Art in Belgrade and accessible both online and as a printed publication. The journal aims at providing the academic community and the general public with recent research on the diverse creative expressions of Africa and the complex cultural and social processes in African countries and the diaspora, as well as the reception of African art and culture within specific European/Western frameworks.

This issue features scientific articles by authors affiliated with foreign and local museums and scientific research centres: Alex de Voogt, Jacklyn Grace Lacey, Rémy Jadinon, Marko Pišev, Ana Sladojević and Elizabeth M. Brooks. The papers deal with following topics: visitors’ interaction with the exhibition display at the New York Natural History Museum; examination of the musical practices in Gabon communities through the example of the sacred harp used for the secular music; polygyny and the complexity of the marital roles and relationships in contemporary African societies; new methodologies and technologies of digitisation in museums – the case of the Museum of African Art’s permanent display; visualization and experience of the Kibuki ritual in urban Zanzibar.

You can also read two interviews: a double interview with curator Simon Njami, of and Bonaventure Soh Bejeng Ndikung, director of the Savvy Gallery, regarding the WIR SIND ALLE BERLINER: 1884–2014 exhibition, held in Berlin (2014-2015); the second with Christine Mullen Kreamer, the deputy director and chief curator of the Smithsonian National Museum of African Art in Washington D.C. with regard to the exhibition on Afro-American and African art, which was an important part of the program with which this Smithsonian museum celebrated its fiftieth anniversary.

In the reviews and museum chronicles you can follow the activities of the Museum of African Art in Belgrade and other museums, in reviews featuring exhibitions of African art held at the MAA and other international museums. In the “Out of MAA” chronicle section learn about ongoing projects - children’s workshops at the MAA and the digitalization of the MAA’s photo-archive.