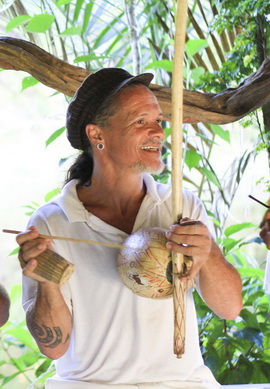 Throughout the 20th century, capoeira has crossed the borders of Brazil and spread worldwide. UNESCO has listed it as part of the world’s intangible cultural heritage and it has an important role in the preservation of Afro-Brazilian culture in Brazil and the world.

The lecture is in English and will be followed by a presentation of capoeira Angola.

Mestre Cabello is a well known Mestre in the world of Capoeira Angola and a gifted percussionist. He has dedicated his life and work to Afro-Brazilian rhythms, musical instruments, singing and dances. He learned from some of the greatest masters: Mestre João Grande, Emilia Biancardi and Jorge Alabê. He travelled the whole world teaching and participating in numerous cultural events. Today he lives in Brazil, in a small village Serra Grande in the state of Bahia where with his family he has a farm dedicated to cultural events, ecological activities and sustainability. With his wife Tisza, who is also a Mestra of Capoeira, he founded the group Centro de Capoeira Angola Ourovede, which besides the group in Serra Grande, today has affiliates in Brazil, Mexico, Israel and US. Apart from the farm, they founded a cultural center Barracão D’Angola where classes of Capoeira Angola, percussion and dances are held for kids and adults, as well as similar activities dedicated to the preservation of tradition, culture, nature and society. This is his first visit to Belgrade.

The Festival of Afro-Brazilian culture is held from November 3-5, 2017 and is organized by the academy Capoeira Angola Belgrado.

Entrance is free and open to all.