UNPROTECTED WITNESS NO. 1: AFRODISIAC
An Intervention on the Permanent Display of the MAA 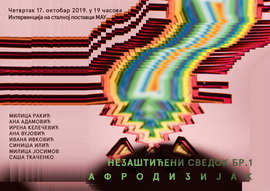 The Unprotected Witness is a museum object, a well-kept memorable substance exposed to artistic interpretation and reinvention. The first Unprotected Witness is interpolated in the premises of the permanent exhibition of the Museum of African Art – the Veda and Dr. Zdravko Pečar Collection (MAA). As a subtitle, Afrodisiac refers to the eponymous groundbreaking 1973 album by Fela Kuti and the beginnings of Afrobeat. The whole concept of the setting can be interpreted from the musical backdrop (the aforementioned Kuti and the song, Public Witness Program by Fugazi from their 1993 album) of political-artistic visions of Kuti and Fugazi, but also within the phenomenon of institutional critique that morphs into institutional chic.

The exhibition will run at the MAA until 22 December 2019.