Picnic at the MAA

Nature in the centre of town! Flowers, trees, birds and squirrels, butterflies and dragonflies, cats and dogs, animals big and small – all part of Belgrade’s asphalt surroundings.

We invite you to Picnic at the MAA! Spend the whole day, Sunday, 28 July, from 12 noon to 9 pm in the Museum of African Art Park. The event is organised by Kišobran, with the help of Zaokret cafe, Kabinet Brewery and Burger House. We have joined forces to plan your day filled with many music, creative, educational and contents of pure pleasure.

In harmony with the sounds of nature, and in charge of the music are Kišobran: intro and warmup by Do the Math followed by DJs Igor Jadranin & Andrija Milosevic.

Sunflower Yoga Beograd will guide you through two light yoga session, and after that, a more vigorous performance by Capoeira Angola Belgrado.

The Museum of African Art has tailored two educational and creative workshops for kids: Make Egyptian Cartouches (from 2 to 3:30 pm) & Let's Play Senet – the Ancient Egyptian Game (from 5 to 6:30 pm). Don’t miss the opportunity to stroll through the exhibition Under The Spotlight – Ancient Egyptian Collections in Museums in Serbia with Egyptologist Nenad Marković (starting at 4 pm).

Entrance to Picnic at the MAA is free and we encourage you to come with your family “and all (other) animals”. Bring a ball, frisbie and other playthings! Scenery courtesy of our resident guest – nature!

Creative workshop for children:
MAKE YOUR OWN EGYPTIAN CARTOUCHE 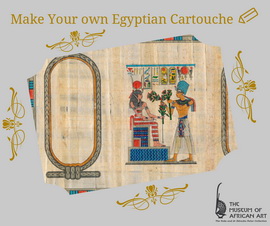 In Ancient Egypt the names of the pharaoh, queen and other prominent people were written in hieroglyphics on special, framed ovals called cartouches.

Children will discover particular hieroglyphics and write their names on cartouche-like papers.

Also, the workshop will include a presentation of famous examples of artworks preserved inside the Egyptian pyramids, which will serve for the creation of their own paper pyramids. 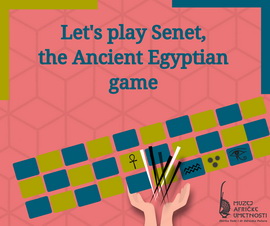 Senet is one of the oldest board games in the world and it originates from ancient Egypt. The name of the game means passage and its connection with a journey towards immortality and obstacles which one must overcome.

Senet was immensely popular everyday board-game among ancient Egyptians and was played on many occasions. It is a frequent motif of ancient Egyptian reliefs, depicting members of the family or an individual playing against their soul ba. The earliest fragments of the boards and figures date around 3100 BCE, and many of them are kept in the museums worldwide.

Participants of the workshop will have the opportunity to make their own board, counters and learn the rules of the game. Then they will play senet in pairs. 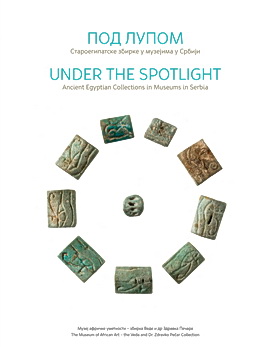 Nenad Marković (b. 1986, Belgrade) completed his bachelor and master studies of history at the Faculty of Philosophy in Belgrade (2014), and he is currently working on this doctoral thesis at the Czech Institute of Egyptology of the Charles University in Prague. His PhD dissertation deals with priestly families and their mutual connections in Memphis (570-486 BCE). He received stipends from Stiftungsfonds für Postgraduates der Ägyptologie (2015, 2018) and the Robert Anderson Trust (2017). He was part of the Czech Institute of Egyptology’s archaeological excavations in Abusir (2017) and conducted research in numerous museums, archives and libraries across Europe and in Egypt.

Currently, he is working on a solo project investigating non-royal elite women in Lower Egypt (664-332 BCE).

Members of Capoeira Angola Belgrado will present the capoeira Angola form and Sаmbа dе rоdа dance-performance. Capoeira – as a technique, dance, performance, martial art, accompanied by music and the rhythm of percussions – appeared among Africans who were brought as slaves to Brazil in the 19th century. Based upon the notion of attaining harmony between body and spirit, movement and rhythm, it is taught and learnt primarily through interaction, observation, repetition and creating, each and every time, a new shared experience between the participants of the hoda (circle) performing space. Initially, this Afro-Brazilian art was a form of entertainment camouflaging with music, song and movement, elements of history, culture, certain messages and/or heritage. In the 1930s it was officialised as a sport in Brazil, thus opening up towards all segments of society. Today, capoeira is a global phenomenon and in 2014 UNESCO inscribed it on the Representative List of the Intangible Cultural Heritage of Humanity. Besides dance and the movements of defence and attack, songs and music played on the musical bow birimbau and percussions, participants of the capoeira hoda (circle) share values such as the principle of common respect between communities, groups and individuals, the importance of social integration and remembrance culture regarding the injustices of cultural repression throughout history.