After the Museum of African Art part of the works displayed at the BORDER IS CLOSED exhibition (11.9.-7.12.2015.) travelled to Zagreb!

Galerija Nova / Showroom, Teslina 7 in zagreb, Tuesday December 15th, the "шkart kvart" exhibition was opened. The exhibition was organised in collaboration with "whw / what, how and for who" and was on view until January 23, 2016.

"The Border is Closed" exhibition opened at the Jadar Museum in Loznica January 28 and will be on view until February 15, 2016.

Experiences and impressions of the Savremena International School students after their visit to "The Border is Closed Exhibition". 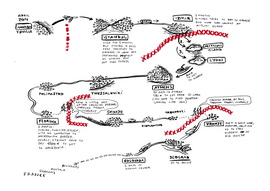 “The Border is Closed – First Steps” exhibition of the Museum of African Art was displayed at the hole of the Belgrade Youth Center during 44th FEST (International Film Festival).

Originally , this exhibition was displayed at the Museum of African Art in Belgrade, 11th September – 7th December 2015, as a result of collaboration with NGO “Group 484”.

In the space of the Youth Center one segment of the exhibition called “Migrants maps” (The Art Collective „ШКАРТ“) was on display.

The aim of the exhibition is to raise public awareness about the way we look at the historical moment of migration in which we participate as well. What sets this exhibition is its pronounced social activist notes, which is a relatively new concept and practice for the museums, especially those that operate in Serbia.