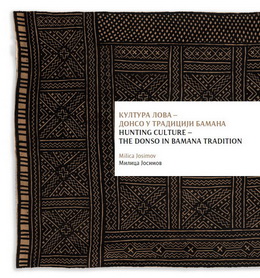 The exhibition HUNTING CULTURE – THE DONSO IN BAMANА TRADITION presents the ethics, beliefs and special status of the hunter in society based on the choice of objects collected by Dr. Zdravko Pečar and Veda Zagorac in Mali and other West African Countries in the 1960s and 1970s. Zdravko Pečar’s hunting collection is a separate unit within the collections of the Museum of African Art in Belgrade. It was exhibited from 1973 to 1983 at the Međimurje County Museum in Čakovec (Croatia), his hometown, and in 1983 it was showcased for the first time in the Museum of African Art in Belgrade.

Donso is a traditional term for hunter in Bamana culture, a concept implying a particular individual’s great knowledge of the natural habitat, its flora and fauna, as well as his exceptional endurance, courage and skill in hunting. Being a passionate hunter himself, Pečar was dedicated to proving his abilities, and on many occasions he went hunting with his friends and fellow-hunters from the Bamana communities in Mali. He learn from them about traditional hunting knowledge and Pečar was awarded the highest hunting title by the Bamana hunting society.

The exhibition Hunting Culture – The Donso in Bamanа Tradition. From the Museum of African Art’s Collections showcases examples of bogolan fabrics with painted geometric motifs and more recently made industrial cloths, which are a potent symbol of Bamana and Malian cultural identity (and even more widely – as an all-African symbol). Also, a musical instrument – the kora is displayed. It was the accompaniment of musicians and storytellers, the griots, who versified hunting feats. There are also examples of hunting clothing, such as traditional shirts, trousers and caps, with different amulets that were believed to protect the hunter from the dangers of the wild.

As part of the hunting accoutrement, the exhibition features various types of weapons: flint rifles, often decorated with coins, shells and other accessories, including spears, arrows, daggers, etc. A special section of the exhibition is dedicated to Zdravko Pečar’s hunting trophies of the bibal, kob and other antelopes, the savannah buffalo, wild boar, pangolin and lion, as well as documentary photographs proving Pečar’s donso status, proclaimed by the Bamana hunters of Mali.

The exhibition was opened by Ivica Dačić, First Deputy Prime Minister and Minister of Foreign Affairs on Thursday, 28 November 2019.

MAA photo-documentation research and prepartion of video materials for the exhibition: Milica Naumov