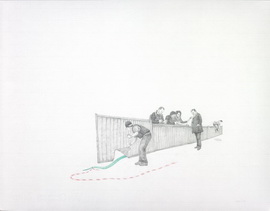 Thirteen images from six series have been shown at the exhibition Poles Apart in Belgrade’s Museum of African Art – “Alterables”, “Survey of the Outside”, “Shapeshifters”, “Scale Models”, “Moody’s” and “Promise”, including two works that are not part of a particular series: “Interval” and “Untitled #3”. Besides the drawings, two animations are exhibited: “Potential Memories. Alteration #1” and “Untitled”.

Massinissa Selmani’s work finds its inspiration in socio-political issues, from press cuttings he has been collecting for a number of years. It is through confrontation and juxtaposition, without a logical coherence between these real-life elements that Massinissa creates enigmatic and ambiguous scenes, underlining the ironic, even tragic character of the absurd and strange situations represented in his drawings.

Massinissa Selmani lives and works in France and Algeria. Following his computer studies in Algeria, he was accepted into the École supérieure des BeauxArts de Tours. Massinissa Selmani, whose work was awarded an honourable mention by the jury of the 56th Venice Biennale in 2015, has participated in numerous solo and collective exhibitions, both in France and overseas. Winner of the Art [ ] Collector Prize and the SAM Prize in 2016, Massinissa Selmani has also exhibited his work in the first edition of the Triennale de Vendôme, the Dakar Biennale and in the 13th Biennale de Lyon in 2015.

The exhibition was opened by H.E. M. Frédéric Mondoloni, the ambassador of France to Serbia and Fadilj Eminović, a member of City Council.

GUIDED TOURS THROUGH THE EXHIBITION

Guided tours through the "Poles Apart – Solo exhibition of the works by Massinissa Selmani" were given on Sundays at 11 AM (have a look in the events calendar).

Massinissa Selmani was a guest of Museum of African Art in Belgrade (18.10-20.10.2018). During this period, MAA organized accompanying programs with artist: 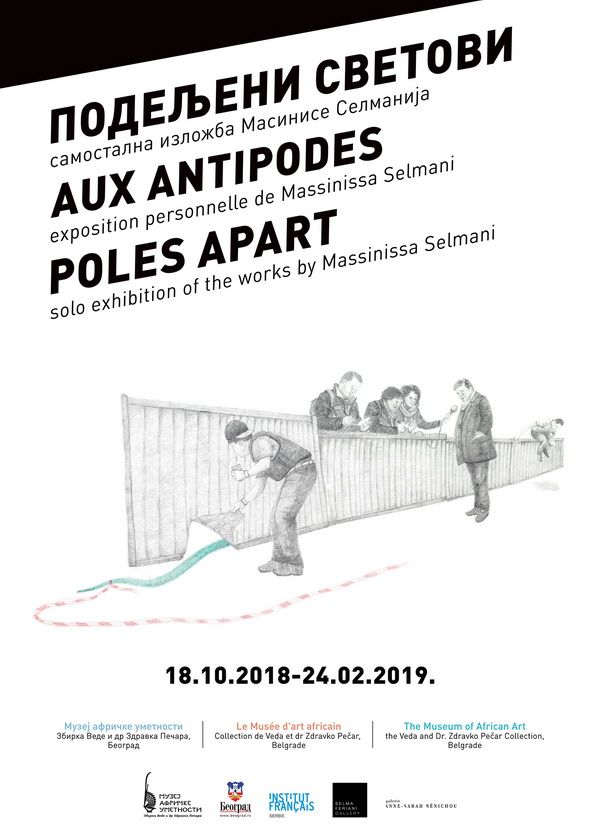